5 Common Eating Disorders and Their Symptoms

People who develop unusual eating habits and attitudes about food that lead to physical and mental changes can be said to have an eating disorder. It can be difficult to tell what is considered healthy eating and what is not as people frequently go on diets and focus on their weight in their daily lives. When a person’s feelings about food or their weight become obsessive and lead to health problems then they may need to get treatment for their behavior.

Different types of eating disorders lead to varying relationships to food and eating. Some become very restrictive and rigid and others tend to lose control around food. People with eating disorders often have issues of body image that can lead to low self-esteem and issues of depression. 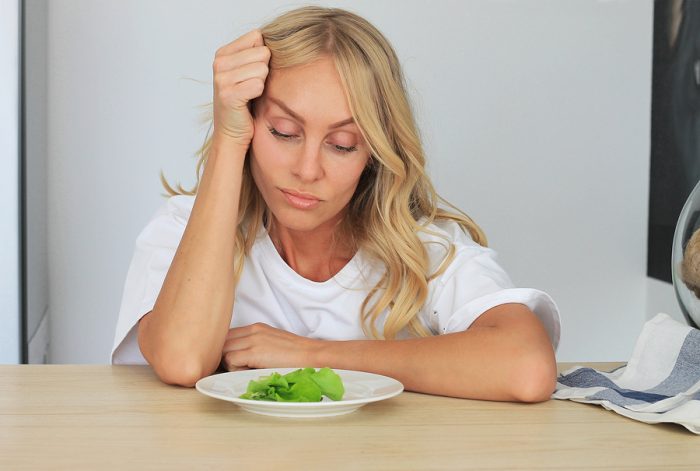 Restrictive eating is one of the most frequent symptoms of eating disorders and people with anorexia tend to focus on very restrictive habits. They might intentionally reduce their calorie intake, avoid eating certain types of foods or fast regularly. As a result of their restrictive eating patterns, they will rapidly lose weight and develop an intense fear of gaining any weight.

People with anorexia tend to have a distorted image of what they look like, believing that they are much bigger than they actually are. They often become underweight and develop serious health problems as a result of being malnourished. During treatment, they will be required to gain weight and learn how to repair their relationship with food.

The second most common type of eating disorder is bulimia nervosa which combines both restrictive eating habits and binge eating. A common symptom of bulimic eating disorder is that the person will most often restrict their food intake but will sometimes lose control and end up eating a large amount of food quickly. They will then cope with their binge by purging through vomiting or using laxatives to get the food out of their system.

The binge and purge cycle is what characterizes someone with bulimia along with issues of body image. Many people with bulimia actually have a very normal weight but have an intense fear of gaining weight following a binge. Purging can lead to very serious health problems because of the damage it causes to the body.

For those who are completely unable to control themselves around food, they can be said to have binge eating disorder. Someone with binge eating disorder with have issues with overeating but does not restrict their intake or purge in order to get rid of calories. They will go through cycles of binging and eating unusually large amounts of food in a short period of time until they feel uncomfortable.

After a binge, someone with this disorder will go through a lot of feelings of guilt and shame about their behavior. They will start to rapidly gain weight and may be overweight or in many cases struggle with obesity. There are many health problems associated with obesity and binge eating disorder that will need to be addressed if they receive treatment.

Although this disorder may sound similar to anorexia it is actually a very different problem that can develop in childhood and continue long into adulthood. Someone with ARFID is often not intentionally trying to lose weight but they have a general lack of interest in food or a distaste for certain colors, smells and textures. They can be very picky eaters and will consume a very small amount of calories as a result.

People with this disorder can have problems maintaining a healthy weight and may have development problems as they get older. They often develop nutritional deficiencies because of their aversion to certain foods or their lack of interest in eating. Their eating habits may interfere with normal social functioning such as eating with others.

The term orthorexia is a more recent name for a problem that has not yet been recognized in the Diagnostic and Statistical Manual. However, awareness about this issue has been increasing as more people develop obsessions with healthy eating. Orthorexia refers to a fixation on eating healthy foods to the point of damaging your well-being.

People with orthorexia compulsively check the ingredients in food and will cut out food groups from their diet including meat, dairy, sugar or anything that they deem unhealthy. They may rapidly lose weight and experience distress when they are unable to have access to healthy foods.

Eating disorders can be accompanied by a number of other symptoms including issues of mental health. It is important for anyone with symptoms of an eating disorder to get professional help from a treatment center.